How do you assemble 120 different bicycle and e-bike models weighing between 5 and 28 kg quickly and ergonomically? At ROSE Bikes in Bocholt the production is organised as a flow production with flexible assembly carts from ROEMHELD. They are the result of a joint development project. The variable assembly lines are highly productive and ergonomic; with a pleasant and stress-free working atmosphere, the bicycle manufacturer also attracts new employees.

New employees are hard to find in Bocholt the company headquarters and the only production site of ROSE Bikes, a few kilometres from the Dutch border. Because of its continuing corporate growth, the bicycle manufacturer needs new bicycle mechanics more urgently than ever.

Attractive contract conditions are part of the job offer: Production takes place in a family-friendly single-shift operation with flexible working hours, work is done in the bright and friendly assembly hall that was newly occupied in 2020, and the employees can help themselves with the strawberry and tomato plants on the company premises. The salary structure is transparent, and training and acquiring additional qualifications are strongly encouraged.

Furthermore, the bicycle manufacturer offers pleasant working conditions: Instead of producing on a conveyor belt, as is the case with other bicycle manufacturers, ROSE manufactures flexibly in six assembly lines. There, the employees take turns at different stations. “The conveyor belt is far too inflexible and means stress for the employees”, explains Stefan Strauss, production manager at ROSE Bikes. The flow production is more human, and it is also easier to train lateral entrants. “We don’t have anyone standing with a stopwatch,” he emphasises, “work should be fun.”

Strauss, a trained bicycle mechanic, had remained loyal to ROSE Bikes since 1983 when he began his apprenticeship. Today he is responsible for 80 employees, 70 of whom work in production. The company, with 480 employees, designs and manufactures mainly sporty bikes. Its wide range of products extends from simple mountain bikes for just under 800 € to high-end road bikes with carbon frames in the price range of over 8,000 €. Apart from the numerous e-bike models, the strongest demand is currently for muscle-powered gravel bikes.

ROSE supports its bicycle mechanics in production in the best possible way. An essential component in these efforts is “Bike Promobil”. This is the name of the flexible assembly cart for ergonomic work. It supports the employees in every step of their work. In this way, it helps to prevent them from overexerting themselves and getting tired too quickly.

ROSE has purchased a total of 130 “Bike Promobil”. They are used on all six assembly lines. The bikes move on them through up to 15 flow production stations. Simple models are assembled in two lines with a maximum of eight stations; complex bikes have up to 15 stopping points. The production time varies accordingly: the dirt bike “The Bruce” without gears is ready in 50 minutes. In contrast, the e-bike models of the series “Xtra Watt EVO” take around 220 minutes.

Stable and yet easily movable

“Bike Promobil” is a mobile cart that can be used variably and without external energy such as electricity or hydraulics for all assembly tasks in production. This allows ROSE to design production lines and processes efficiently and flexibly and to react quickly to customer order patterns and material availability. Also, the device enables employees to take on different assembly tasks so that their work is more varied. “Our goal,” says Strauss, “is that every fitter can work at every station.”

The “Bike Promobil” heavy base frame is easy to move thanks to large castors. When working on the bike, the mechanic locks the device by foot using the central lock. Indexing on two rotary axes in 15-step increments allows him to fix the frame precisely in numerous positions. As rotary couplings are integrated into the axes, the bike can be moved infinitely in any direction.

The rotary axes also allow the bike to be swivelled sideways so that the bottom bracket and brakes are easy to reach. If the worker needs to adjust the assembly height, he simply guides the bike diagonally upwards or downwards along the rotary axes. The frame can be fitted ergonomically, and the finished bike can be set down again close to the ground. 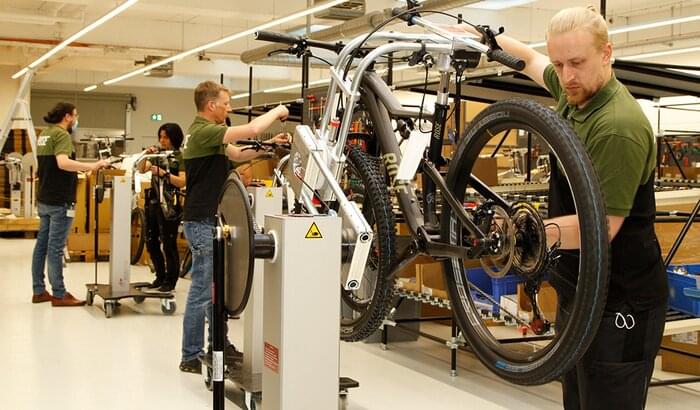 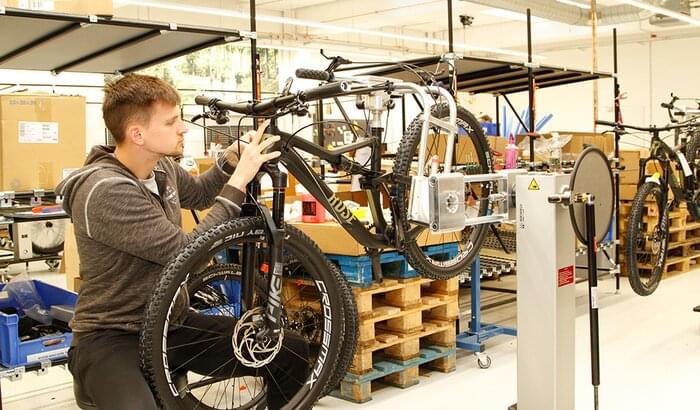 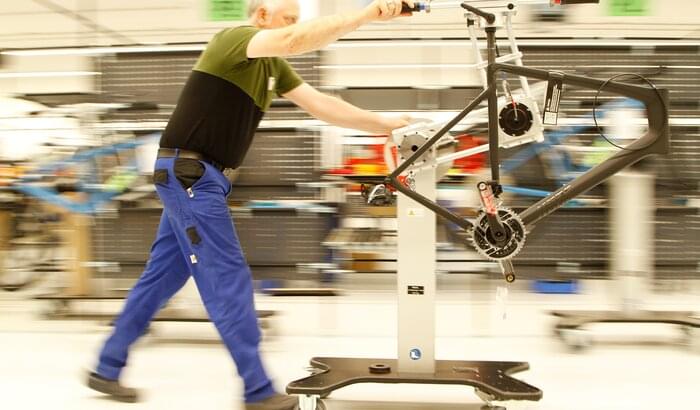 Variable load compensation can be adjusted to suit the assembly progress and bike weight. To do this, the mechanic only has to adjust a gas spring with a spanner. He can thus effortlessly change the bicycle position at any time and adjust it for comfortable work.

The self-built device was only of limited use

Working was not always as comfortable as with the “Bike Promobil”. “More than 15 years ago, we used to hang the bikes from the ceiling with a hook for assembly,” recalls Strauss.

The production manager then developed an assembly cart himself. This one had various disadvantages, as he admits: First, it was only adjustable in height, which is why the relief when working was limited. Then it was somewhat unstable so that bicycles sometimes fell off. And thirdly, the bicycles were clamped with the front wheel hub, which was not always gentle on the material.”

Around 2019, the operational limits became increasingly apparent. Because bicycles whose weight approaches the 30 kg mark must be easy to reach in any position and easy on the back - the merely height-adjustable aid did not allow for this.
Also, the design of the front wheel hubs became more and more diverse. Therefore, some bikes could only be attached to the self-construction with great effort. When ROSE began to build models with a hub that was closed on one side and could not be fixed, it was clear that a replacement was urgently required.

The new device: an all-rounder for ergonomic work

The successor should be suitable for all model types and all hub variants. Moreover, it should be just as easy to operate with heavy bikes as with light versions. Also, all assembly work and positions should be easily accessible. Lastly, the operation should be just as simple at the beginning of the assembly, when the bikes are still light, as at the end when they have reached their final weight.

“At first, I wanted to develop an assembly aid myself again. My idea was a device where all bike models are held over the frame. But unfortunately, I was so busy that I never had enough time for this,“ admits Stefan Strauss.

Instead, 2020 employees of the ROEMHELD group of companies from Laubach in Hesse presented him with an assembly stand. The assembly and handling technology experts presented the innovation for the first time in 2019 at the Motek, the trade fair for production and assembly automation. “The model was a bit too massive, heavy, inflexible and expensive, but it seemed to be expandable,” the production manager remembers. As a result, ROSE and ROEMHELD agreed on a development partnership.

For ergonomic, flexible and efficient assembly of bicycles, cargo bikes and e-bikes.

Development project by ROSE and ROEMHELD

During the project, the heavy and expensive assembly stand, which was originally planned for automobile production, became a slim, flexible and lightweight cart - “at an attractive and competitive price”, as Strauss points out.

Instead of being clamped over the frame, the bike is clamped over a dummy in the seat tube. For different diameters, the employees use adapter sleeves that only have to be pushed into the tube. This simple and elegant solution is universally applicable and inspires the production manager. “So, we can clamp seat tubes with battery cable or cable for the lowerable seat post without any problems using a clamping adapter with an internal groove.”

“Our mechanics are very satisfied with the ROEMHELD assembly cart”, he summarises the feedback. At first, some employees were still a little unfamiliar: The multitude of adjustment options was strange at the beginning. But after trying it out and getting used to it, the sceptics are entirely convinced. “Everyone wants to keep the “Bike Promobil” device.”

Rose Bikes is a customer-focused bike brand from Bocholt (NRW) with a mission to provide people with unique biking adventures. The 480-strong family business focuses on its high-quality mobility and performance bike products, which are developed, assembled and distributed throughout Europe at the company’s headquarters. In the 2021 financial year (31 October), total turnover amounted to 148.7 million euros.

The multi-award-winning company is a leader in omnichannel retailing, combining online and offline touchpoints in curation, advice and service. The wide range of products and services can be experienced online and stationary in the ROSE Stores in Germany from Bocholt to Cologne and Berlin to Munich, as well as in Switzerland at Lake Zurich and in numerous cooperation shops.